International Women’s Day is a unifying global phenomenon marking achievements of women and girls everywhere. This year’s theme “Gender equality today for a sustainable tomorrow” recognizes the contributions and the distinct roles women play in  leading the charge on climate change adaptation, mitigation, and response, to build a more sustainable future for all.

This year’s celebration comes at the time when the country is fully opening its economy after the global pandemic which wreaked all progress already achieved. In his remarks, the UN Resident Coordinator in Rwanda, Mr. Fode Ndiaye called for continuous inclusive rebuilding of all sectors and engaging women and girls in decision-making discussions, especially on climate change actions at community, national and international levels to reduce emissions and increase resilience to climate change.

He commended the Government of Rwanda for undertaking several measures to address climate change, starting with the ratification of the UN Framework Convention of Climate Change (UNFCCC) in 1992, developing the National Adaptation Action Plan (NAPA) in 2000, formulating a low carbon growth strategy, being the first country to revise its NDC and for the leading role in COP26.

In her remarks, Minister of Gender and Family Promotion, Prof Jeannette Bayisenge and the guest of honor reiterated that “today's celebration is an opportunity to reflect on the role of women in the development of the country, reflecting on their achievements and taking concrete action to remove barriers that women and girls are facing in their daily lives! All this with the aim of empowering women in the 2050 vision to build a stronger and safer society; and we need men and boys as allies”.

During the ceremony, 298 telephones were handed to the coordinators of the National Women Council at the sector level and health workers, while 22 cows, 843 chickens, 100 goats, 41 water storage tanks were given to selected exemplary women. 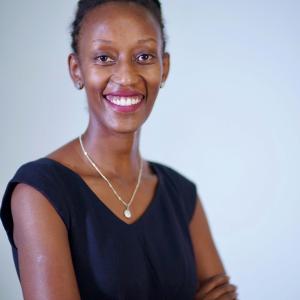