What is the Resident Coordinator's Office?

The RC leads the Country Team (UNCT), which is composed of representatives of all the UN entities with a presence in the country. Working closely with the Government of Rwanda and with the support of the rest of the Country Team, the RC coordinates the UN agencies that make up One UN, advocating for the mandates of the whole UN system.

One UN has a new Development Assistance Plan. This document sets out the areas of One UN action contributing to the national development agenda in Rwanda. Recently signed with the Government, the United Nations Sustainable Development Cooperation Framework (“Cooperation Framework”) covers the period 2018-2024. As per the UN reforms that came into force in January 2019, UNSDCF is a coordinated, joint effort between agencies: all 'Delivering as One' under the umbrella known as ‘One UN’, and coordinated through the RCO.

This Delivering as One approach capitalizes on the strengths and comparative advantages of the different agencies of the UN family. In doing so, Delivering as One increases impact through more coherent programmes, reduced transaction costs for governments, and lower overhead costs for the UN system.

There are five principles of Delivering as One, which depend upon on the coordination function provided by RCO:

These principles help the UN system to align programmes and funding more closely to national priorities. Delivering as One strengthens government leadership and ownership. It has also ensured increased access to the experience and expertise of a wider range of UN organizations.

The UN Resident Coordinator in Rwanda

Mr. Ojielo brings to the position more than 25 years of experience in sustainable development work, including experience overseeing a global portfolio of programmes and projects with the United Nations in Central Asia and Africa that covered four continents. Within the Organization, he most recently served as Resident Coordinator in Kyrgyzstan, after working as Resident Coordinator, Resident Representative of the United Nations Development Programme (UNDP) and Representative of the United Nations Population Fund (UNFPA) to the Kyrgyz Republic for one year prior to that. He also held other leadership positions at UNDP, including Cluster Director for Governance and Peacebuilding in Africa at UNDP’s Regional Service Centre for Africa in Addis Ababa, Ethiopia, as well as Director for Conflict Prevention and Recovery at the Bureau for Crisis Prevention and Recovery of UNDP in New York, USA. He also took on other senior roles with UNDP in Kenya and Ghana.

Prior to joining the United Nations, he was an attorney, university teacher, journalist and advised truth, justice and reconciliation as well as human rights commissions in Ghana, Liberia, Malawi, Namibia and Sierra Leone. He also served as the President of the Centre for Peace in Africa, a regional non-profit in Nigeria, and is the founder and first president of The Institute of Chartered Mediators and Conciliators, the largest mediation and conciliation organization in Africa. 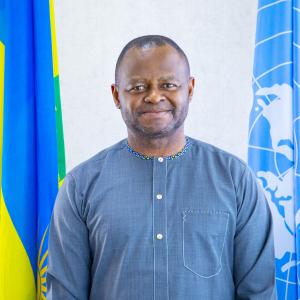